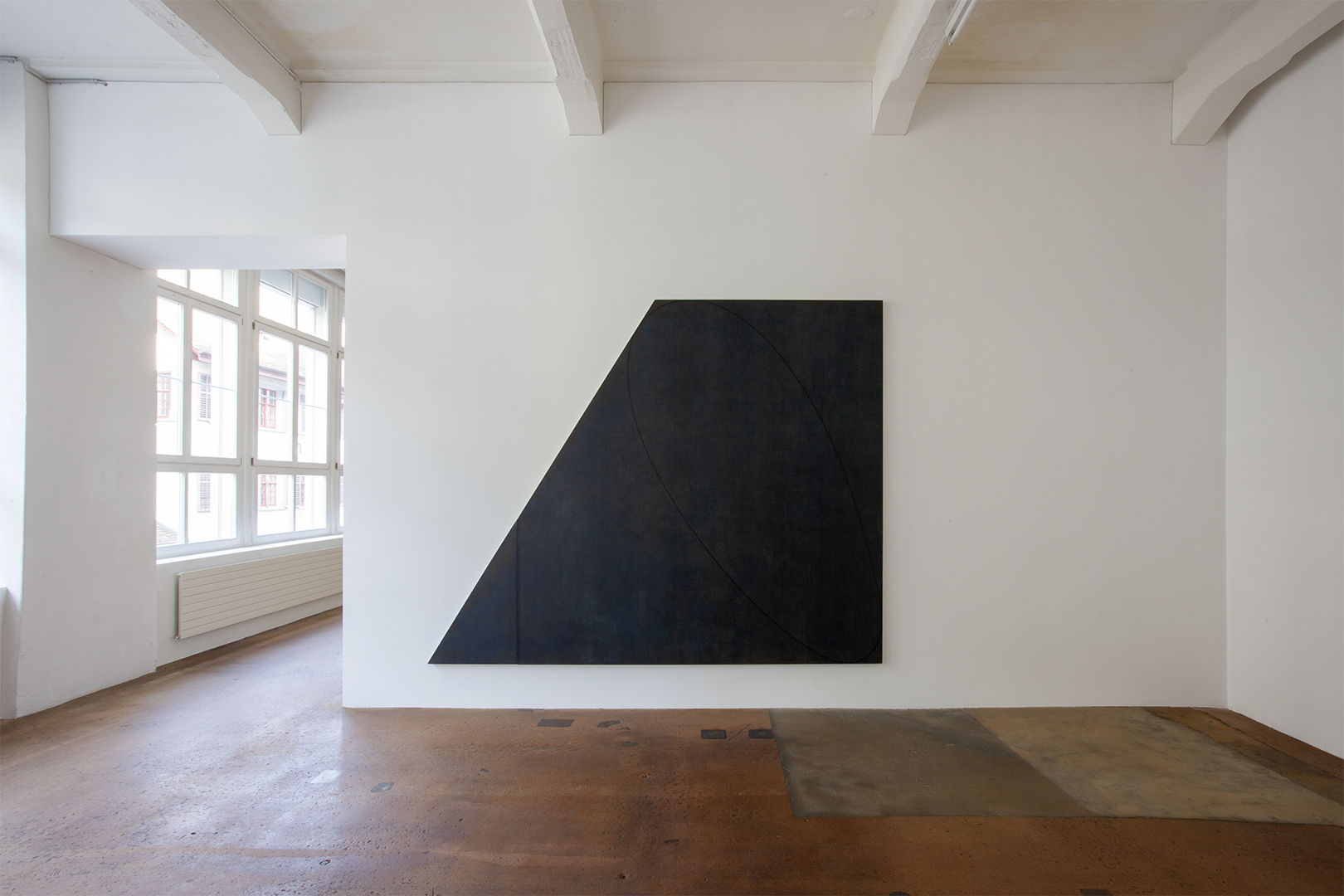 Urs Raussmüller has consistently used his installations of artworks as an opportunity to communicate his view of the specific situation in question and to share his feelings, experiences and thoughts with others. The following statements are excerpts from a conversation that took place on 17 August 2011 inside the exhibition Robert Mangold: Extending Perception. This Mangold presentation was realized by Raussmüller in the Hallen für Neue Kunst, Schaffhausen, and could be experienced there until the closure of the institution in 2014 (cf. the slideshow of installation photographs on this website).

… When I talk about insight in this Mangold installation, I don’t mean insight into the Mangold works, but rather insight gained through them. So I’m talking about a process that is triggered by these paintings. To a certain extent, they have the effect of an initiation, which allows us to recognize things and connections that, without the works, we would not have perceived. And so we can now also start talking about why this thing called art makes sense. What effect does it produce? What happens to us? Works of art like these Mangold paintings are an incredible trigger for making us aware of something that, even though it exists, we were not conscious of. No doubt you find something like this not just in art, but here, in our field, we are dealing with an extraordinary potential for insight.

In the paintings that Robert Mangold produces, nothing is transported – nothing in the sense of theme or content. No aspect of these works is the “most important”; no parts are superior or inferior. Nothing is given that would somewhere create a dominance. All the factors that make up these paintings exist in perfect balance. We might say: the works are democratic – or non-hierarchical, that is perhaps the better word.

In Mangold’s paintings, everything is there on equal terms. Through the fact of this equality, everything is also available – irrespective of whether we have consciously perceived each of the parts that are there. And the realisation that everything in the works is available, also transfers itself to what exists outside them. Everything becomes available. Mangold’s works exert an effect that extends astonishingly far beyond their own bounds; they connect with their surroundings – something that directly includes us. Not all works of art are so open, I think, that they exercise such an all-encompassing effect. Many are self-contained in nature; they want to express something specific. Some want to teach, others to illustrate something. As such they pursue an aim and do not have this degree of freedom. It is a great and rare thing, this freedom…

I recently spoke about Matisse’s Dance, that apparently so badly painted picture from 1909. It illustrates the fact that what really counts is not what Matisse has painted, but rather the high degree of openness and availability with which this painting greets us. Great art is always free and also grants freedom. And minor art often has intentions, whereby it excludes freedoms. This, I think, is an essential criterion when it comes to the perception of art. This same freedom comes into play in the case of Mangold’s works and the parity of all aspects – within the works and beyond them.

I think the really extraordinary thing about what Mangold does is that he takes painting to a point where traditional hierarchies no longer exist and where no kind of dominance is exerted any more. This gives me the freedom to bring in myself and to let insights arise without preconception in me and through me. I see the thing in a new way and a different way every time. The work never loses presence, and yet it produces a different impression in me each time.

There is also the fact that these impressions constantly change as a result of external influences, too. I looked at Mangold’s Four Color Frame Painting in the afternoon last time; with the luminosity it took on in that light, it was really incomparable. In the morning I saw the luminosity that emerges from the yellow in Painting for Three Walls – and that was extraordinary, too. The works radiate a strong aura. And I perceive them differently every time. They are just like the world, really, like the sky, which is different every evening.

Mangold’s colours are basically not hues. They are the yellow of an envelope and the grey of a tool. In this respect they are very quotidian. They do not claim to be artist colours. Mangold uses these ordinary colours so as not to disrupt the homogeneous structure or the natural, self-evident character of the whole. The colours appear in his works with same unpretentiousness as the tapering of the outlined shape or the joins between the parts of the painting. Everything remains on this level of equal value and contributes to the fact that nothing thrusts itself to the fore. And yet – for this very reason? – the whole is not without tension.

And then in this Four Color Frame Painting you also see the wall in the painting. The wall per se is not an accentuating element, but here it is key. It connects the reality of the work directly with the real space in which it is located. The painting has this joined-together quality, these four planes fusing into a rectangle, which have a parallel in the architecture of the space and its construction. Since the planes surround wall, in the case of the Frame Paintings the wall of the installation venue effectively becomes part of the work.

All these things connect on a very real level. Individually and as a whole, they are the thing itself. The spaces here [in the Hallen für Neue Kunst], too, have no aspects that stand out. The way of proceeding with these paintings, therefore, is certainly not in the sense that a specific dynamic, or some other kind of effect, now needs to be created somewhere. That is completely unnecessary given the nature of these works. And in this installation, the combination of paintings and space has actually fused into a unity, a whole, almost by itself – both within the individual spaces and in the sequence of all the spaces we have here. And in my view, if it is truly a whole, then this wholeness is also found in each of the parts. And when I go over to where the black Attic Series Painting is – a work with a much more compact effect than the Frame Paintings, for example –, I feel this unity of work and space there as well. So when I talk about the effect produced by this wholeness, I can say: in this installation there is no beginning, there is no orchestrated crescendo, it is all simultaneous, contemporaneous. I myself am still filled with impressions from the previous room and am standing here in another place with another work, but here, too, I feel this all-encompassing effect.

I know that the way of seeing we’ve been talking about is quite uncommon, given that for the longest time we’ve approached the phenomenon of art with a completely different mindset. Our expectation in the past has been that artists wish to tell us something specific with their work, and we are the ones who are hopefully able to grasp their message in whole or in part. We are the viewers. But in what we are talking about now, we are not just the viewers. We are involved, we are directly part of the thing itself.

It is a completely different position, in other words, in which we find ourselves here. The situation concerns us directly. We are actively addressed. Simply standing in front of the painting in order to look at it in isolation from its surroundings – that doesn’t work here. We won’t get any further with the distanced attitude of the viewer. Perhaps we can mobilise some kind of artificial device, build a suggestion into our process of perception that tells us what we have to see. If we then feel uncertain, this shows that the suggestion doesn’t marry with what is there.

And if we then suddenly realise that something here isn’t right, we perhaps also become aware that what is wrong is myself, with my preconceptions, with this idea that something ought to be the way that corresponds to my expectations. But that isn’t the case here. It is like in Bruce Nauman’s Floating Room: I’m there inside, but what I expect isn’t there and now I have to find a new standpoint. It is simply not possible to remain the distanced viewer. It is not possible to assess the situation as if from outside. We are directly affected.

When we engage with something, we need to give it our attention. That can’t just be done quickly. Insights are not found on the surface. We need to understand that phenomena demand to be studied in their depth. This goes so far that we become the phenomenon itself. That is to say, we have delved into the phenomenon to such an extent that we can now make it the basis for our development and understanding. We have penetrated to the heart of the thing and become, so to speak, the thing itself. And from there we can now advance into these complexities, without losing ourselves in them. We can also break down, one after the other, the different parts that are simultaneously playing a role – provided that we do not lose sight of the whole and look at the thing from that perspective.

This approach is a process. We never stop advancing towards the heart of the thing. No specific result is thereby yielded, however. There is no end point, no absolute. This kind of perception, which is a dynamic one, does not lead to a fixed point, a result that marks the conclusion of the process of perception. It is a dynamic process that never stops as long as you live.

So I think that is the terrain we are operating within. If we now go and start saying that this is form and that is colour, this construction and that line, and this, lastly, is the application of paint, then we destroy everything that makes up this whole, this unity. We start to pick it apart and cut it up. And by cutting it up, we destroy the whole. It’s like with a hare: once you’ve dissected a hare, you can’t find out how it runs around anymore, can you?