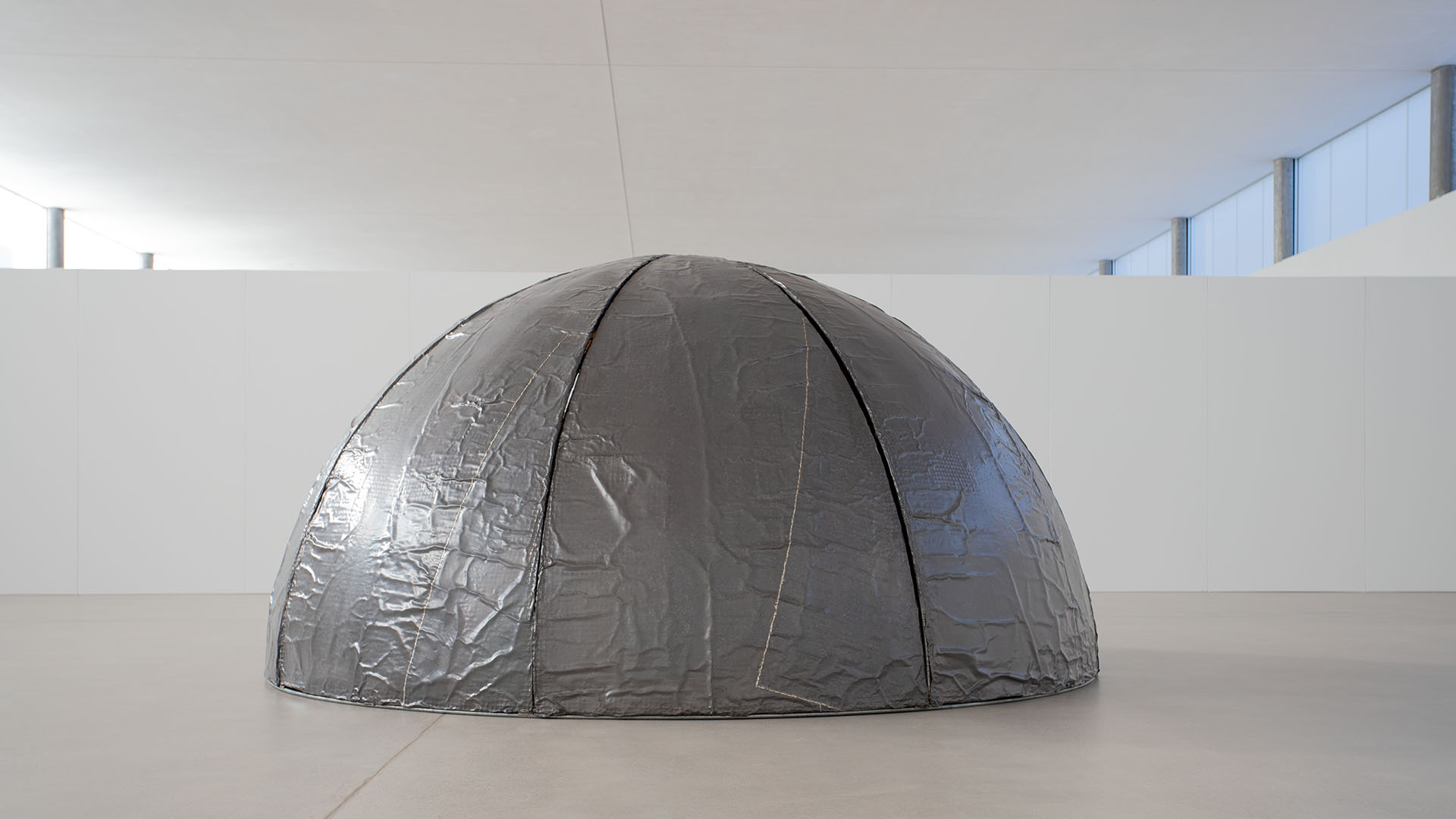 The lead-covered hemisphere stands compact and closed in the space and allows no glimpse into its interior. Even the integrated form made of yellow wax – a door? – offers no real opening, but holds at most the promise of access. Unlike other works by Mario Merz, this igloo has none of the air of a dwelling, but seems instead to be concealing a hidden situation behind a protective shield. A key to entry can be found in the title of the work, Virgilius, memoria futurista.1 The name of Virgil2 (Lat. Virgilius) inevitably conjures in our imagination the image of a descent into the underworld – and the idea of steps that, inside the lead-sheathed igloo, spiral downwards like a funnel ever deeper into the earth. Dante3, considered the immortal poet of the late Middle Ages and the founder of the Italian language in literature, chose the Roman poet Virgil to guide him on his journey through the nine circles of Hell in his epoch-making Divine Comedy.4 Virgil was an erudite author venerated since antiquity, who in the Middle Ages was even attributed with magical powers. His epic Aeneid5 had provided the Roman Empire under Emperor Augustus with a founding history and the later Italy with a basis of its identity. With Homeric power, Virgil built the achievements of his day and the vision of a future upon a mythical past. He thereby took the Latin language to a new height, just as Dante would later do with Italian. He was familiar, moreover, with the passage through the underworld, which inspired Dante to entrust himself to Virgil’s expert guidance some thirteen hundred years later: Virgil’s hero Aeneas, too, had descended into Hades in order to return to the realm of the living with a vision.

But there is another side to Virgil, that of his bucolic poetry. Virgil loved rural life and made it the subject of verses and treatises.6 Merz, with his own deep connection to nature, called Virgil the “poet of pastures and shepherds”. In a poem titled The castle of leaves is an ideal work of architecture7 (1982), he speaks of the “longing for the sweet verses of Virgil” and of “the history of longings”, in which history forgets itself. “Time is the season, the scent of the leaves saturated with colour”, and “the painting of the leaves is life lived directly”. For the artist Merz, as for Virgil, the perception of the present in nature was a stimulus for creative activity. The rhythm without history of becoming and maturing aroused in the artist feelings that he also found in the verses of the Roman poet. Merz speaks in his poem of art as a form of devotion, calls the act of painting “the art of the sacred” and evokes Virgil’s “desire for peace and [spiritual] recollection”. He understands painting as “the altar of leaves” – erected “to a mythical god of the seasons”. Merz’s poetic text conveys to what effect the “mysterious” colours of leaves conjured within him “nostalgic yearnings and Futurist acts of daring”.

In Merz’s poem, the concept of “Futurist” occurs for the first time in association with Virgil and “nostalgic yearnings” (or memories) – just as it will later reappear in the enigmatic title of the present igloo. And in the context of Merz’s verses, the linking of memory and future, which in the title – in English, Virgil, Futurist Memory – initially reads like a contradiction, suddenly acquires meaning. The “Futurist acts of daring”, called to mind by the colours of nature, bring back an epoch in which Italian artists proclaimed the dawn of a new age: with revolutionary, at times eccentric demands, they exalted dynamism and technological progress at the beginning of the twentieth century and gave new forms to art and a new self-assurance to (Italian) artists. The evocation of the Futurists, and of their art and early manifestos, makes clear what potential for change lies in the development of visions. In the context of this capacity to trigger processes through visions and to create the conditions for a new consciousness, it is possible to trace a bold connection between Virgil as the founder of a new (Roman) view of history and early Futurism’s commitment to a modern age. Another connection is based on the artist’s elementary need for inspiration. This latter Mario Merz drew above all from nature, poetry and art. He found it in Virgil and – with the “leaves saturated with colour” of autumnal trees in mind – also in the forms and colours of Futuristic painting: “yellow liberates itself from red and from green with passionate violence”. And he found it in history as a yardstick for his own time. Unlike the militant Futurists, Merz did not reject the past, since the principle of development and progress only becomes evident against its foil. The “idolatry of the past is filled with the dynamics of the present” and “emanates tempestuously but solemnly / from the wonderful forms of the Cubists and Futurists.” In Merz’s view of history, the epochs connect by means of the energy of the respective present. This latter provides the drive for the desire for progress that shapes the future. And thus he also found Virgil in the poetry of the rising American nation: “You can see Virgil in the American and Manhattan breath of Walt Whitman8” – in the linking of current upheavals with traditions and closeness to nature. Merz was persuaded of this holism of history and visionary present, in which nature is a timeless constant and art is a gauge. He recognized, in the sensing of the connections, the creative power that he admired in Virgil and which he also encountered in Futurism. The title of his igloo is a reminder of this power, which is found in Merz’s own work, too.

The expressive igloo with the title Virgilius, memoria futurista was produced in April 1988 in Japan for the artist’s solo show at the Institute of Contemporary Arts in Nagoya.9 Merz spent a month working on site in order to create pieces that corresponded to the Institute’s large galleries. Among other things, he built a table that expanded outwards in the shape of a spiral and which, like the igloo, he covered with lead sheet. The flat surface of the table, however, imparts a different effect to the lead than the hemisphere of the igloo: on the table, the heavy material resembles a grey blanket that has been loosely draped over the top, whereas it covers the igloo like a skin. With this protective layer, the lead igloo encounters the light as an umbrella meets the rain, collecting it with its curvature and releasing it again over a broad area. The light makes the lead gleam, takes away its severity and lends it a colourful vibrancy, without rescinding the coherence of the form. One of the eight segments comprising Merz’s igloo incorporates a leaf-shaped element made of beeswax – the hint, as mentioned above, of a doorway leading inside. The colour of this wax element generates an impression of warmth, and the opacity of the material suggests that light may penetrate weakly through it into the interior. But the wax, like the lead, also serves to firmly seal and to separate inside from outside. The wax form fits organically into the curving walls of the leaden hemisphere, so that this igloo indeed embodies the idea of a mysterious, hermetically sealed inner world. From a technical point of view, the work consists of eight curved triangles, which start from a circular base (nadir) with a diameter of four metres, and taper towards the zenith of the hemisphere. The triangles are a construction of curved tubular steel and wire mesh, covered with lead sheet. The wax insert is the only element of a different nature within the otherwise homogeneous lead sculpture, which is structured solely by the lines dividing the segments and by silver-shimmering soldered seams. Wax is a material with which Merz worked regularly and from an early date. He deployed its plasticity and colour to full effect in various dimensions and contexts, frequently in combination with inorganic materials and occasionally, too, in pure form – as in the large wax spiral which, as a site-specific project for the Museum Haus Lange in Krefeld in 1981, he integrated with the architecture of Mies van der Rohe. The wax form in his lead igloo calls to mind, among other things, the sheets of wax that Merz hung in front of raincoats in 1966/67 and subsequent years, and which he pierced with a neon tube as if with a lance. Lead sheet, which unrolls like fabric, is likewise a material employed by Merz on multiple occasions, on igloos as well as on tables, covering a large surface or as an attribute. Both wax and lead are malleable and under heat can change their appearance or even disintegrate. Cold and moulded into shape, they have traditionally been used as a means of sealing and closing. But lead is a poisonous metal and its use often injurious to humans – we may think of the Lead Chambers in Venice, or of lead cannonballs. Beeswax, on the other hand, conjures positive emotions as a nourishing and pleasant-smelling natural product. Merz plays with these dialectical aspects, above and beyond the aesthetic effects of the materials, and aims at the associations they trigger.

The artist’s thoughts evidently continued to revolve around the sealed lead igloo with its clear silhouette and mysterious aura. In 1989 he thus created a smaller, untitled version for his retrospective at the Solomon R. Guggenheim Museum in New York.10 He had already built an igloo with lead and wax in 1986/87, albeit without the integrated effect of his Virgilius: on the domed roof of this earlier structure, he placed cubic elements that projected out from the segment walls like dormer windows.11 With these works, Merz constructed three-dimensional architectures that embody a resolute state of closure – in their form as in their materials. Virgilius, with its spatial presence and compact appearance, is a prototype for this phenomenon. No other igloo version in Merz’s oeuvre is pure, self-contained hemisphere to the same absolute degree. All the more interesting is the additional dimension that the artist lent to the work through its title. For with the succinct, complex name Virgilius, memoria futurista, he opens up, on another level, the access denied by the igloo’s external appearance: he expands the physical expressiveness of his work into the realm of the imagination and, with its impact on the senses, also sets in motion a dynamic process in the viewer’s mind. “I think the igloo has two sides – a concrete one and a mental one.”12 In the case of the present igloo, the sides challenge and thereby enhance each other, and their combined forces leave profound impressions in the recipient’s consciousness.

Translated from the German text by Karen Williams

1 In English translation, Virgil, Futurist Memory, the title under which it appeared in the catalogue of the autumn 1989 Mario Merz exhibition at the Solomon R. Guggenheim Museum, New York, p. 263 and p. 277.

6 Around 40 BC Virgil wrote ten bucolic poems, which became known as the Eclogues or the Bucolics. Soon afterwards, he wrote the Georgics, comprising four books on agriculture, which he dedicated to his patron Maecenas.