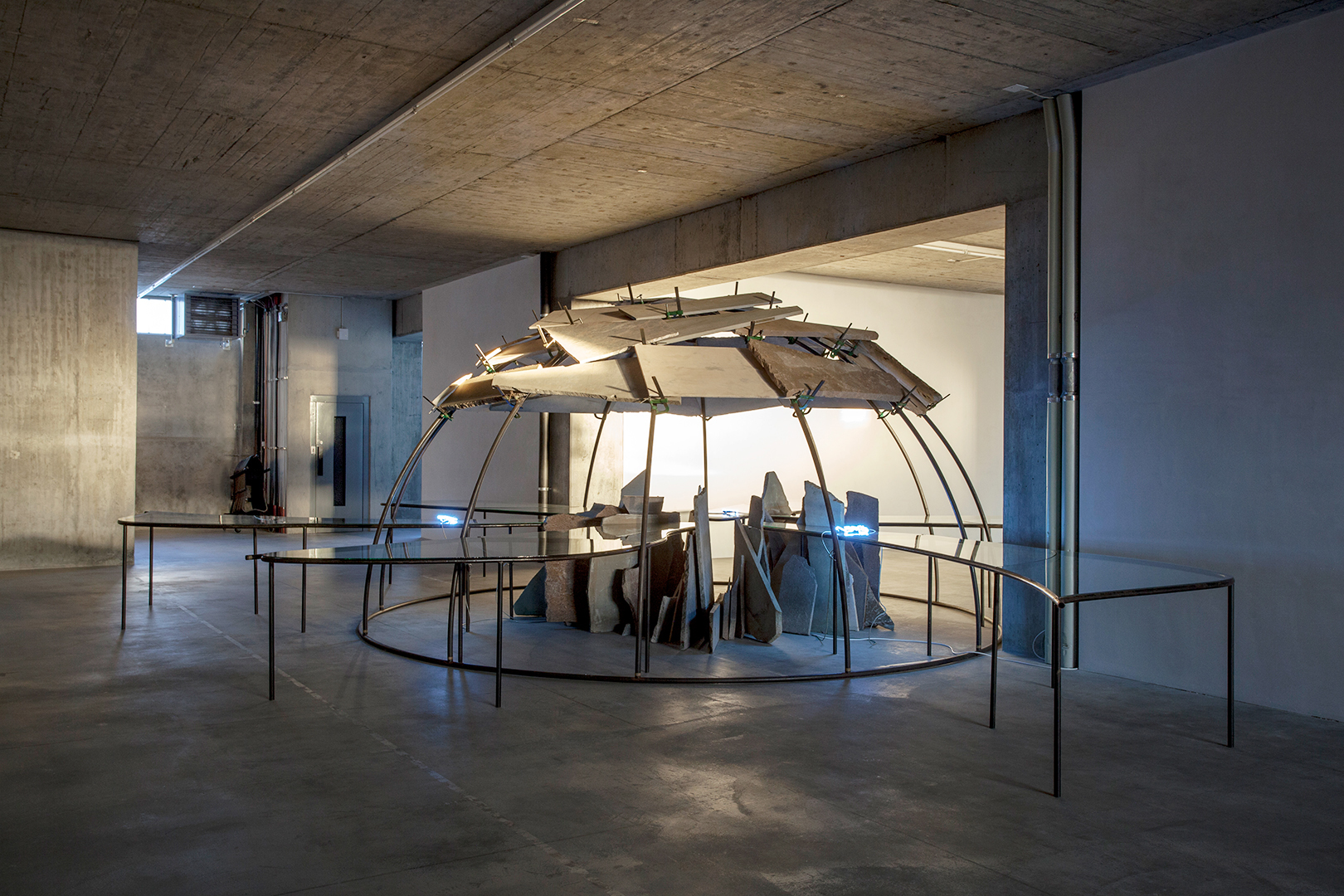 Unprocessed stone, found wood, broken glass. Something like originality or archaism in the materials, which probably triggered the idea of calling it poor, does not arise from the material itself, but from the fact that it does not appear to be sophisticated. Found fragments are appropriated and used by those who found them but left in their unrefined state. Trouvailles of the urban landscape, defective glass panes and irregularly broken stone slabs, wire mesh and plastic tarpaulins. Some of Mario Merz’s igloos resemble shelters, but all built with found materials, more provisional than permanent; like urban tree houses or gang camps instead of being built with branches and rotten planks, constructed with the undergrowth of industrial society. They have no entrances and close themselves off to the outside. It seems like they hold their interior all the more secure within themselves. Almost automatically, one wonders what is inside them. Or who should inhabit them.

The Igloo with the title I gradini mangiano la scala o la scala mangia i gradini… from 1995 at Raussmüller in Basel is quite different. Two and a half meters in height and with a diameter of five meters, it is covered with stone slabs on the roof, but open all around. Six tables made of tubular steel with glass plates expand from the centre of the igloo into the room. Inside the igloo, stone slabs arranged in a circle lean against the ends of the tables. All three types of stones are used, exposing their specific characteristics. During their long period of formation, sedimentary rocks have built up many different strata, recounting the (hi)story of geological periods. The interfaces of superimposed layers correspond to the former sedimentary surfaces – the surface of the earth, the sea floor or the bottoms of lakes. Because of the imminent structural characteristics, the slabs of stone enable the reconstruction of habitats that have long disappeared. It is an unimaginable time and incredible historical narrative that these stones carry within them. It is so long that even the time of the igloo as a prototypical dwelling moves close to our time. The hemisphere of steel and stone resembles the earth half sunk into the ground, reminding us of the geological formation of the earth as a rock. Metamorphic rocks such as marble, slate or gneiss hold within natural forces of great pressure and high temperatures which actually caused their metamorphosis. They also refer to the chaotic conditions in the early days of the earth from which our present world was created through continuous transformation. They are virtually „an archetype of assembling, elevating, counting, pressing and dissolving, an unwelded seam, […] the culmination of the immeasurable cycle in which things participate in order to reproduce not their images but themselves.“2

The earth gives birth to magmatic rocks from its centre, which are the third great group of rocks; either as the Plutonites named after the god of the underworld or as the Volcanites named after the god of fire. They are solidified liquid rock and still carry within them the fundamental heat from which they originate. This, in turn, was responsible for the evolution of the first living beings on this planet, which developed on the edges of hydrothermal springs in the primordial ocean. In particular limestone and dolomite, which bind carbon dioxide from the atmosphere during their formation, have thus helped to make the earth habitable even outside the sea and to keep the carbon dioxide content in the atmosphere extremely low compared to Venus and Mars, for example.

But in recalling these geological periods, Mario Merz is not concerned with the factual findings of historical research and geology: „To me, exploring our side of history has always seemed pointless, especially since exploring it would only have provided an infinite, all too logical cataloguing of events that one never sees, but which presents itself as knowledge without probably being one.“ Rather, it is the emotional presence of a feeling for a continuous evolution in which one stands as a human being, but which is more comprehensive than merely related to human development. In the words of Merz: „This art unites nostalgia, but magically and magnanimously preserves the past in its furious here and now.“3

The stone slabs inside the igloo are gathered around in the shape of a campfire. They convey a feeling of community and exchange, both of which are instrumental for the development of human society. Like tables that illustrate the elevation of man off the floor to gather—the emergence of culture.“’Slabs with paws become tables.’ The complexity of these new relationships, human legs in anthropomorphic relation to the table paws, provokes the temporary suspension because of a novelty.“[4] The faint glow inside the igloo originates from neon-lit numbers placed on the tables. A Fibonacci sequence, a common feature in many works of Mario Merz; it is a symbol of natural growth, development and refinement.

„But which of the vital structures in the new house allows this very house to expand from the inside out? It is possible to identify this very structure in a device made up of tables that are in the process of expanding. […] The tables are the intellectual and practical space, created above the floor. The tables, a device for intellectual and practical expansion, will break down the dividing walls in the future and pass on the practical, that is the artistic-architectural, message. The house unfolds corresponding to the evolution of the future.“5

The tables, symbolizing culture, strive just like the rational being out of the igloo into the wide world in order to pursue the quest for knowledge and to get an idea of everything that exists. Instead of closing the igloo off to the outside, as a refuge, as protective space, the tables expand into the architectural surroundings as well; this architectural expansion invites the space (and with it, the visitors) to use it.

Unlike most of Mario Merz’s other igloos, this one is only covered with stones at the top, allowing an uninhibited view through the igloo and opening it up to the entire surrounding space. In its present location, Urs Raussmüller has combined it with two other untitled works by Mario Merz from 1985 and 1989 to create a unified spatial setting.6 This arrangement strives to establish various references between the works and allows for new meanings and connections to be generated. It is as if the stones, which were formed in pre-geological ages, were connected to the long cloth painting that spreads out next to them on the wall; and as if the non-representational, powerful and colourful painting were to reveal the beginnings of a cosmogony. The emergence of the world out of the primordial lake into a tangle of forms and colours! Or – when one turns one’s gaze in the other direction and the crocodile made of papier-mâché seems to come closer, as the last descendant of the dinosaurs, stone-aged, unchanged since primeval times. It is a connection to a past world, but arrived in the here and now, fragmentary, yet current.[7]

However, Mario Merz does not want to teach us anything about crocodiles, geo-chronology or the creation of the world. His art teaches us that we are taking part in the process of the development of the world. This process influences us, but it can also be influenced by us. In his own works, Mario Merz has carried out this strategy by combining parts from different works and creating new ones; he did not cultivate a static, closed concept of the work of art as an unchangeable image, but a dynamic, changeable one. His works invite us to enter actively into the evolutionary processes in which they were created, instead of just looking at his works and seeing them as a representation or a statement. For this means „to confuse the image of the thing with the thing itself is the guilty conscience of trendy uselessness and laziness, a sluggish inescapable mirage of futility.“8

Find our publication “Mario Merz: Senza titolo (Coccodrillo)” by the same author on another work from the Mario Merz installation in the Raussmüller Hallen here.